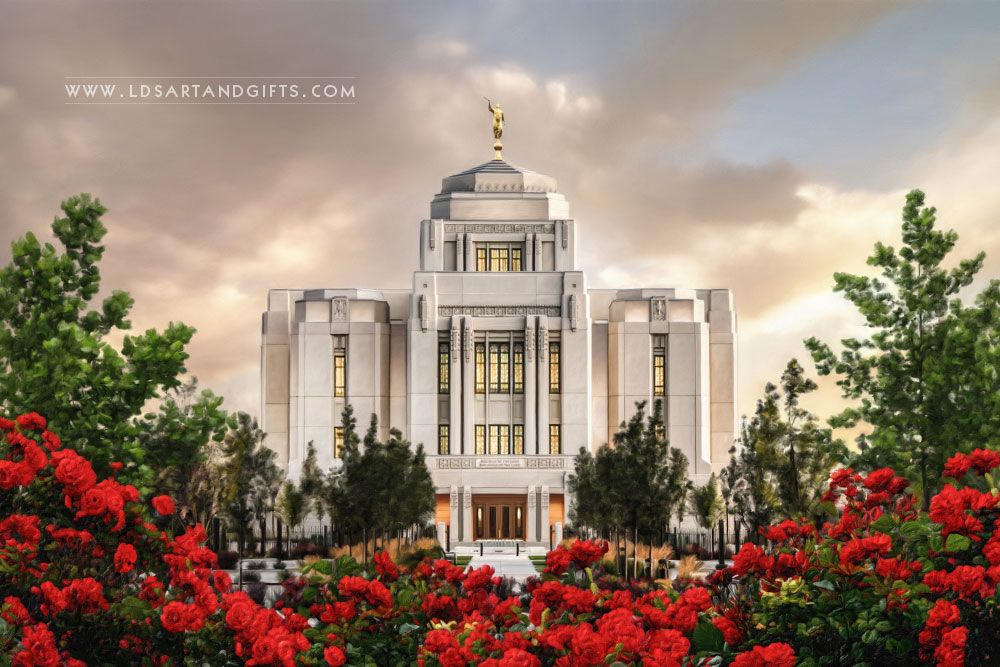 Brent Borup began creating inspiring images from the comfort of a cozy, renovated garden shed in his backyard. He describes his journey to being a full-time artist and selling his paintings across the Western U.S. as such: “I’ve always known I wanted to be an artist, but people always tell me ‘You can’t make a living out of it,’”. But as it turns out, they were wrong. Brent has become increasingly successful over the past few years, and today we wanted to share part of his story.

Brent is becoming widely known for his religious paintings that he creates using a blended technique of oils and digital “painting”. While he continues to paint primarily religious subjects like portraits of Jesus Christ and temples, his repertoire also includes landscapes and portraits of religious and historical figures.

A native of the Boise area, Brent started painting pictures of LDS temples about eight years ago. His first painting was of the Logan Temple. Eventually he decided to start selling photos outside of his art gallery in Preston, so he rented a small space at a large event. His prints at that event were so popular that he had to come home each night and print new ones to sell the next day!

Since then, his business has grown immensely, and his artwork can now be found at Deseret Book, Seagul Book, and a number of other locations. He also continues to sell his work at events across multiple states. He loves how many pieces of his art, especially his pictures of Christ, he can get into people’s homes.  He feels that he has a higher purpose in sharing religious art in places it is not ordinarily seen.

“I figure it’s part of my job and my religion to expand the kingdom of God on earth,” Brent says. “So, that’s what I try to do.”

While his audience is primarily LDS, Brent also tries to make his work appealing to those outside of the LDS Church by experimenting with different ways of painting the face of Jesus Christ. He feels that some of his paintings depict a more “Catholic” Jesus and some a more “Mormon” Jesus.

But regardless of the techniques and styles used, painting a portrait of Christ is not an easy task. Like many artists, he has spent years “trying to get that face just right.” Referring to his numerous portraits of Christ, Brent says, “I’m happy to be able to share these images with others.”

Brent’s artistic style is unique among LDS artists. His paintings are created using what he calls a mixed-media method. He begins by paintings the scene or subject with oil paints. Then he captures it digitally and begins a significant amount of additional digital work. The final result is a beautiful image that has a smooth, almost surreal quality to it, touched with delicate hints of light in all the perfect places.

Often we think that just because something is digital, it makes it so much easier. But that’s definitely not the case with Brent’s work. Blending the two mediums is not as easy as touching a button, and he still calls them paintings, because that’s what they are. Whether you use a real, physical brush or a digital brush, you’re still painting.

“Some people think that if I do it on a computer, I push a button and run it through a filter,” Brent explains. “They don’t understand the work involved. There’s still a lot of painting.”

In the end, Brent says his goal is to inspire people with his artwork.

“That’s why I do a lot of temples,” he says. “I think if you can have a picture of a temple in the home, and it helps your child see that special goal, then mission accomplished. That’s what I want. I want my artwork to be able to lift people up on bad days.”

All of the above paintings are for sale and can be found by clicking on them. Or simply visit Brent’s page here.